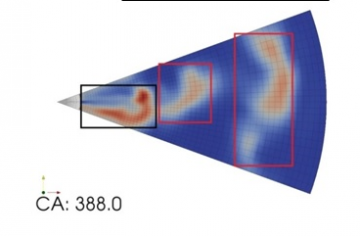 Pooyan has joined EAL in 2012 and completed his MASc before starting his PhD in 2015, working in the EAL and the Engine Research Group. Before coming to Canada, he obtained his BSc in Mechanical Engineering from the University of Tehran, Iran.  There, he joined the Vehicle, Fuel, and Environment Research Institute (VFERI) where he modelled the electrochemistry and fluid mechanics of the lead-acid batteries.

In his MASc research, Pooyan used LES models of in-cylinder phenomena in a High-Pressure Direct-Injection (HPDI) natural gas engines with a diesel pilot.  The image to the right shows that soot regions are spatially separated when the natural gas injection is split temporally.  The models were able to explain the large PM reductions due to split injections that were measured in the lab. He has also worked with Faghani on the development of fast phenomenological models for the prediction of soot in HPDI engines.

Since summer 2015 he has been working on the calibration and commissioning of a fast engine exhaust PM sensor that was designed and fabricated at UBC in the 2011-2015 period. The goal of his research is to measure and analyze the variability of the exhaust soot, a phenomena that is known to exist in direct-injection engines and negatively impacts their transient operation. Indeed, recent measurements with FEN have confirmed this hypothesis, where up to 3-fold variations in light scattering signals (indicating soot levels in this instrument, see image to the right) among successive cycles was observed.